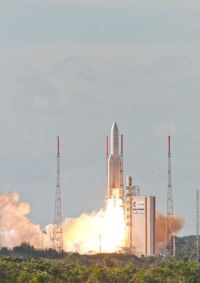 Inmarsat says that the satellite, called I-4A F4, will strengthen both performance and availability in the Europe, Middle East and Africa region.

The Ariane 5 launcher carrying it took off on Thursday from the Guiana Space Centre in Kourou, French Guiana, at 16:54 local time (20:54 BST). The spacecraft separation took place 27 minutes and 45 seconds later. The Alphasat Mission Operations Team confirmed that they have command of the satellite at 21:47 BST. I-4A F4 is scheduled to reach its final geostationary orbit position on July 31st.

Inmarsat, which owns and operates Alphasat, has invested $350 million into what it calls one of the most technically advanced telecommunications satellites ever constructed for civilian applications.

“The launch demonstrates Inmarsat’s long-term commitment to L-band services, and marks a significant milestone in the evolution of Inmarsat’s flagship satellite fleet, bringing new capabilities both in terms of performance and resource availability.”

The L-band satellite fleet has been providing broadband connectivity for government and commercial customers on land, sea and in the air since 2009.

Alphasat was designed and manufactured by Astrium. Inmarsat says that it is the largest and most sophisticated European telecommunications satellite ever built. It is also the largest Public-Private-Partnership space project in Europe, notes Inmarsat, which has teamed up with the European Space Agency (ESA) to carry it out.