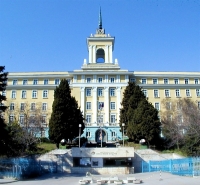 Transas has completed the supply of new training systems to the Nikola Vaptsarov Naval Academy and PanArab E-Navigation in two separate deals, while VSTEP has supplied NAUTIS and RescueSim simulators to the Technical University of Varna.

In Varna, Bulgaria, the Technical University has opened a new simulation training centre incorporating multiple VSTEP NAUTIS and RescueSim simulators that will be used for both maritime and incident management education and training.

VSTEP has delivered two NAUTIS Bridge Simulators, including a 360° Full Mission Bridge Simulator in line with DNV Class A specifications, as well as five Engine Room Simulators and a full classroom with desktop Navigation Simulators for maritime training.

The NAUTIS simulators feature Kelvin Hughes MantaDigital ECDIS and radar/ARPA systems, with the radar video delivered by the recently released NAUTIS Radar Interface Module. The NAUTIS bridge can also be used as an azimuth tug simulator.

At the Nikola Vaptsarov Naval Academy, also located in Varna, Transas has upgraded the training complex to include a full mission bridge simulator with NTPRO 5000 software and a new version of the TGS 5000 GMDSS simulator.

The deal also includes an update/upgrade, service, support and maintenance programme for the next three years.

The visualisation of the Main and Secondary Navigational Bridges was improved as part of the project, extending the screen of the Main Bridge to 300 degrees with a 5-metre screen radius, while the Vessel Traffic Management System (VTMS) simulator was also upgraded to allow imitation of VTS functions and creation of various navigational situations.

The Academy says that it also plans to upgrade its Engine Room Simulation system by the end of 2012.

In Egypt, a Transas Offshore and Dynamic Positioning simulator has been installed at the PanArab E-Navigation (PAEN) training centre in Alexandria, an affiliate company of Pan Arab Shipping Company (PASCO).

The installation consists of an Offshore bridge, reproducing a modern Anchor Handling Tug Supply vessel bridge. It includes elements such as a NAVIS DP2 system, Transas Multifunctional Display, physical controls for all thrusters, winches, pins and shark jaws systems, together with a Seagull 6000 visual system.