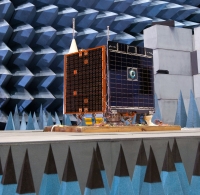 Satellite AIS provider exactEarth reports that it has successfully completed the payload performance testing of its latest AIS satellite, exactView-1 (EV-1), which was launched into orbit in July 2012.

The company says that it will complete the remaining satellite commissioning activities during the rest of October and bring EV-1 into full commercial operation in November, as planned.

The polar-orbiting spacecraft was built under contract for exactEarth by SSTL in the UK and is the fifth deployed satellite in the exactView vessel monitoring satellite constellation. COM DEV Canada acted as prime contractor and COM DEV Europe (UK) supplied the AIS transceiver payload for this mission.

EV-1 uses S-band and C-band communications to downlink information to a number of ground stations around the world.

“We are delighted to announce that EV-1 has passed through the payload performance testing phase with flying colours, exceeding all our expectations in the process,” said Peter Mabson, president of exactEarth.

“EV-1 was designed to be the most advanced AIS satellite built to date and during the testing phase it has lived up to that billing as we have witnessed a doubling of detection rates compared to any of our previous satellite AIS sensors. We are excited with the prospect of making these data available to our customers in the very near future and providing a big step forward in maritime vessel detections from space.”

“EV-1 is the product of exactEarth technology and investment – we see this as setting the gold standard for performance which we will continue with planned launches next year of the Canadian M3M satellite and an exactEarth AIS payload on the Spanish PAZ radar satellite.”