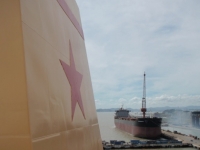 Transas has announced that it will supply ECDIS and official charts to Hellenic Carriers, with the operator’s fleet to be equipped with the Navi-Sailor 4000 ECDIS and Transas Admiralty Data Service (TADS).

Transas says that all vessels will shift to paperless navigation immediately after installation is completed. Hellenic Carriers expects to do that by the end of next year.

Two newbuilds have already been commissioned and now sail with Transas ECDIS. After all the newbuilds are equipped, the other vessels will be retrofitted to also shift to paperless navigation.

Capt Nikos Athanasakos, marine manager at Hellenic Carriers Corporation, said: “It is our management’s decision to invest in technology that will contribute to safety and efficiency of our fleet. We rest assured that with the excellent cooperation and support from Transas Hellas, our fleet will be ready to use ECDIS as prime mean of navigation by the end of 2014.”

Navi-Harbour makes use of sensors like Radar, CCTV and AIS to provide visibility of the marine traffic situation in and around the port.

The system consists of two operator workstations, one recording and playback station and three VHF stations. It also includes an online portal allowing authorised users to view, in real time, the marine traffic in the port and the surrounding areas.