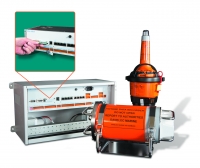 Danelec Marine is introducing a new generation Voyage Data Recorder (VDR) featuring a technology that separates the hardware from the software in order to reduce shipboard servicing times.

All the software is embedded on a flashcard, which stores all configurations. In the event that the VDR unit fails, the service technician can remove the memory card, replace the old unit with a new one, and insert the card in the new system without the need to reload all configuration files. The old unit can then be taken ashore for repair without holding up the ship’s departure.

“This is a paradigm shift in shipboard service,” he added. “With traditional techniques, it can take days to make repairs to a ship’s critical electronic systems […] With SWAP technology, the entire process is completed in hours, not days.”

Danelec says that its DM100 is designed to meet the changes in VDR requirements coming into force this summer, with a float-free capsule and 48-hour data storage, as well as recording from the ship’s ECDIS, both radars, AIS and inclinometer.

Buyers can also choose a number of options that include extended data storage (up to six months), playback software and a remote interface, which can be used, for instance, to optimise fuel consumption.

Production of the DM100 will start in April with the first deliveries expected in May. The VDR will be sold through Danelec’s service partners at an approximate price of $20,000 depending on configurations.