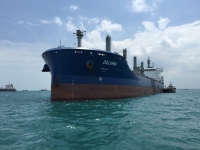 F.H. Bertling Chartering and Shipmanagement of Singapore has signed a service agreement (MoU) with Radio Holland for its fleet of seven general cargo vessels and bulk carriers, ranging from annual radio surveys and bridge equipment servicing to the delivery of spare parts wherever the vessels are operating in the world.

{mprestriction ids="1,2"}Parent company Bertling, which is based in Hamburg, owns a fleet of 21 vessels, and already has an established relationship with Imtech Marine subsidiary Radio Holland, with all of its fleet under a full service agreement.

"As soon as our vessels in Singapore exceeded their extended guarantee period, we wanted to have a similar service partner that our company has in Hamburg," said Captain Piotr Kucharczyk, marine superintendent at F.H. Bertling Chartering and Ship Management.

"Radio Holland is already known to us and has proven that it provides a good service. This is why our Hamburg superintendents recommended Radio Holland, saying that we can really rely on them."

"Radio Holland offers 24/7 service with its global network, but at the same time, we have one direct point of contact in Singapore in the same time zone, which is very important to us."

With the MoU officially signed in March, Captain Kucharczyk notes that the service agreement has already proven to be useful, with Radio Holland assisting in solving a radar problem suffered by one of the company's vessels in Uruguay.

"Often getting any services is complicated in South America. But from Radio Holland’s network we could see that they are available even in remote locations and in places without large ports, where it would usually be difficult to get assistance," he said.

"But they managed, and repaired the radar very quickly."

As well as the seven vessels currently in its fleet – which range from 35,000 dwt to 80,000 dwt – five new ‘Green Dolphin’ handy size bulk carriers will also soon be added, with construction already underway at Huang Hai Shipbuilding Co.

The first vessel will be delivered in September, with the others to follow at regular intervals until August 2016.

"It is likely that these vessels too may come under the Radio Holland service agreement once they are out of their guarantee period," said Captain Kucharczyk.{/mprestriction}