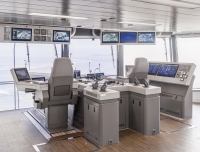 The bridges work independently from each other and include safety override switching between both ends.

The ship, owned by Dutch company Texels Eigen Stoomboot Onderneming (TESO), will sail between the city of Den Helder on the mainland and the West Frisian island of Texel, situated in the North Sea off the Dutch coast, along the edge of the Wadden Sea.{/mprestriction}