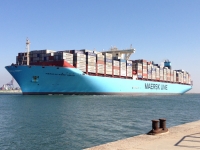 Maersk Line, the world’s largest container shipping company, has entered into a two-year agreement with BigOceanData for the provision of vessel tracking services. The initial system is now live and already in use in operation centres around the world on both desktop and mobile devices.

{mprestriction ids="1,2"}BigOceanData is currently working with Maersk Line to optimise the vessel tracking system for the vessel operator’s in-house systems. The software will initially be used to track the company’s fleet, a total of approximately 630 owned and chartered vessels, using fused satellite and terrestrial data feeds. This information will then be applied to optimisation of the performance of the ships.

The BigOceanData system also supplies additional environmental, navigation and security data which can then be integrated with Maersk Line’s in-house systems, allowing for a secure, two-way exchange of data between those systems and the BigOceanData interface.

“This contract was awarded following a competitive tender, and we are pleased to welcome BigOceanData as a supplier to Maersk Line,” said Stephan Martinussen, head of GVPC at Maersk Line.

“We were impressed by the BigOceanData system during the evaluation process. It delivers a wide range of functionality and at the same time offers an interface that will integrate with our own systems with minimal disruption and maximum effectiveness. We also welcome its ability to combine multiple inputs within a single system which improves overall end-user experience.”{/mprestriction}