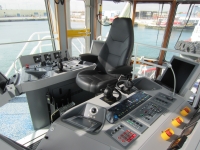 Alphatron Marine reports that it has delivered its AlphaBridge tugboat console system to the RT Trident, owned by Seabulk Towing of Fort Lauderdale, Florida, USA.

The radars on board include the JRC JMA-5200 sea radar, with JRC Constaview, and the Alphatron JMA-610 river radar, especially designed for inland and manoeuvring applications in enclosed waters.

At each end of both consoles is a retractable screen, one with the radar display, switchable for sea and river, and the other a multi-function screen displaying navigation and operational data.

The RT Trident is the first of three new Robert Allan designed Rotortugs for Seabulk Towing, and will be homeported in Port Everglades in Fort Lauderdale, Florida.{/mprestriction}