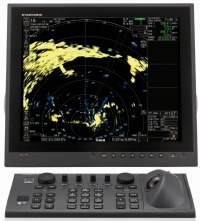 The new FAR22X8BB series will replace the FAR21X7 series, which will cease production this year. The new series will include a simplified user experience and automatic clutter elimination (ACE) to adjust clutter reduction filters and gain settings automatically according to sea and weather conditions. This frees the navigator’s attention for other operations. The new series will also utilise fast target tracking (FTT) allowing the user to manually or automatically track up to 10 targets. Tracked target speed and vector display are available in seconds to ensure quick hazard assessment of moving objects.

The new series will convert the analog signal and digitally transmit to the processor via ethernet connection. This reduces noise and improves sensitivity.

Maintenance will also be reduced via the use of brushless motors that spin the antenna, anywhere from 4' X-Band to 12' S-Band antenna array.

The FAR22X8BB series is also capable of sharing the Radar signal with multiple Furuno Radar models, so a single FAR22X8BB gearbox and antenna array can be networked to drive multiple Radar installations, such as a Furuno Chart Radar or ECDIS, or the Furuno FAR15X8 series.

The FAR22X8BB series uses a smaller processor unit than previous models for fast installation. It connects to the gearbox with a smaller and more flexible cable, while existing cables from the previous FAR21x7 models are compatible with the new series to enable easy upgrades. The processor is capable of outputting 16:9 aspect ratio video, so a wide-screen presentation can be output from the system's dual DVI ports. The controllers from the FAR21X7 series have been retained, and the system can be controlled from these, from one of Furuno's FAR21X7 series trackball controllers, or from a simple, off-the-shelf USB mouse.

Furuno's 250W Solid State S-Band model offers improved target detection at all ranges and has features 'instant on', to eliminate waiting while the magnetron warms up before the Radar becomes available to use. The Solid State option reduces maintenance costs as well as there is no need to replace the magnetron over time.{/mprestriction}