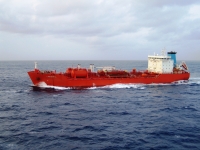 De Poli Tankers BV has recently completed a communications upgrade project which has seen a series of new VSAT installations aboard its vessels.

The communications project was carried out by Marlink in close co-operation with De Poli's in-house affiliate company Maritime Performances BV, which is responsible for management of the tankers, and began with the installation of WaveCall Ku-band VSAT services aboard the chemical tanker Miro D.

Marlink and Maritime Performances have worked together for over three years, starting initially with Inmarsat FleetBroadband services, and most recently collaborated on the integration of standardised Ku-band VSAT packages on De Poli tankers.

This configuration is identical to the systems subsequently installed on five other De Poli Tankers vessels as part of the upgrade project.

The bundled package supplied by Marlink has already been deployed on more than 100 other vessels over the course of 2012, and combines VSAT and MSS connectivity services that can switch automatically via the XChange platform.

XChange also allows the shipping company's shore based staff to connect to the ship and manage its communications.

“We have good control of the available connectivity,” said Ardi van der Wagt, IT specialist at Maritime Performances.

“We can manage the internet access based on time slots for the crew, which means they are able to focus on the job at hand but have freedom to communicate when off duty, which is the important part of ensuring they are happy on board.”

“Vizada XChange helps us to manage the connectivity in this way, especially with the new update which allows us to manage access during specific hours or create allocated time slots for users.”