SatSleeve to allow crews to use own iPhones at sea 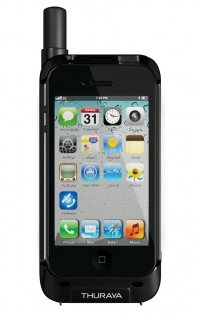 Thuraya has launched a new satellite voice calling product, the Thuraya SatSleeve, a device which can be used to bring satellite connectivity to a regular Apple iPhone.

The SatSleeve hardware fits around the user's own iPhone 4 or 4S, somewhat similar to a protective case, and is fitted with a Thuraya SIM card. An app to connect the phone to the unit is available for free download from the Apple App Store.

Once the unit and app are installed, this allows the user to make and receive calls on their iPhone from anywhere within the coverage area of Thuraya’s satellite network.

Such a capability could potentially be an attractive crew calling option for seafarers on ships operating within reach of the Thuraya satellites, currently covering Europe, the Middle East and large parts of Asia and Africa, who own their own iPhones.

Thuraya, as a wholesaler, has been unable to offer pricing details for use of the product, but Dominique Audion, managing director at Thuraya service provider SAFA Telecom, was able to confirm to Digital Ship that prepaid calls over the unit to a PSTN or GSM network would cost around $1.49 per minute. Post-paid minutes would be charged at $1.34.

SMS capabilities are also available, though the SatSleeve product does not currently support data traffic from the iPhone over the satellite network. Thuraya has however told Digital Ship that this capability is planned to be added to the product during the third quarter of this year.

The SatSleeve hardware unit will also retail in and around the $600 mark, though this will vary between regions based on different taxes, charges and local conditions.

“The launch of Thuraya SatSleeve represents a major milestone and a game-changing innovation in the satellite industry,” said Samer Halawi, chief executive officer of Thuraya.

“This is the first consumer-friendly mobile satellite phone ever launched, which dramatically increases the reach to satellite telephony for enterprise, government, and everyday consumers alike.”

“It provides iPhone users with a versatile and highly affordable means of conducting phone calls and sending SMS via satellite from the world’s most remote locations.”