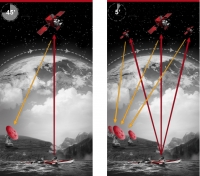 Techno-Sciences, Inc. (TSi), a subsidiary of search and rescue (SAR) systems provider McMurdo Group, reports that it has secured contracts totaling almost €5 million with the governments of Cyprus, Brunei and Argentina, as well as with NASA in the United States.

The agreements involve the deployment of a six-channel  MEOSAR (Medium Earth Orbit Search and Rescue) system in Argentina, a 2-channel MEOSAR extension in the US, and Rescue Coordination Center (RCC) software for SAR authorities in Brunei and Cyprus. Contracts are set to last between one and five years.

Currently, search and rescue relies on Low Earth Orbit (LEO) satellites and geostationary satellites, but SAR receivers are now being placed on MEO satellites – in the Galileo (EU), GPS (US) and GLONASS (Russia) constellations – with the aim of providing quicker and more accurate alerts.

McMurdo provides satellite ground stations to facilitate SAR, as well as hardware and software used in Mission Control Centres and Rescue Coordination Centres. By the time MEOSAR is fully online in 2018, McMurdo says global satellite coverage will take just five minutes, rather than the current time of 45 minutes.

“We are excited to work with the governmental bodies and rescue authorities of these countries to provide advanced SAR solutions that will expedite the rescue process and save more lives.”