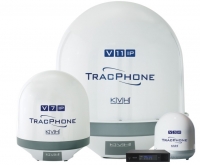 Satcom provider KVH has reported 6 per cent annual revenue growth for 2014, up from $162.3 million to  $172.6 million when compared with the previous year.

This growth was primarily driven by improved airtime and service revenues, which both recorded increases of more than 20 per cent, with the fourth quarter of the year proving particularly strong for the company.

“The investments we’ve made across our business to develop innovative solutions continued to bear fruit during the fourth quarter. With the operational launch of our IP-MobileCast content delivery system during the quarter I am pleased with the reception the service has received in the market and the differentiation it gives us going forward.”

“Our market focus of delivering premium content to maritime customers, including airtime, VoIP phone service, entertainment, ECDIS chart updates, real-time weather updates, e-Learning and safety content, has clearly provided differentiating features for our overall service. We also just announced that we have shipped our 5,000th TracPhone antenna for the mini-VSAT network, reinforcing our leadership position in the maritime market.”

Service revenues of $91.4 million in 2014 were 27 per cent higher than in 2013, while airtime service revenues (which include mini-VSAT Broadband airtime) increased 21 per cent for the period.

Content and service revenues increased 40 per cent, though this includes the addition of a full year’s contribution from Videotel after its acquisition by KVH Media Group.

Cash and marketable securities on hand at the end of the year stood at $48.9 million, with total outstanding debt at approximately $71 million.

“We were particularly pleased with the financial performance of our services business, which generally attracts higher margins than our product revenues,” said Peter Rendall, KVH’s chief financial officer.

“The net impact of these factors was that the company’s overall gross profit margin for the fourth quarter of 2014 was 45 per cent compared to 40 per cent a year ago.”

KVH did report product revenues 10 per cent lower than 2013, at $81.2 million, though this was primarily attributed to an 11 per cent decline in guidance & stabilisation systems.

Looking forward to the rest of 2015, KVH says that it expects solid continued growth in its marine VSAT business and is predicting revenue for the full year to be between $190 million and $210 million.