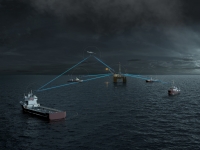 {mprestriction ids="1,2"}During the North Sea exercise MBR was used as the communication platform for data exchange and co-ordination of simultaneous operations. Units were mounted on multiple operational assets, including a plane that streamed real-time surveillance video directly to the vessels, for a different perspective in situational awareness.

Kongsberg says that, by installing MBR communication units on every vessel/asset involved in an operation, a broadband link is established and a maritime ‘information highway’ created, without the need for additional infrastructure and no prospect of data ‘disappearing’ en-route.

The system has an operational range of approximately 50 km at sea-level, and there are also no airtime charges, as data transfer between vessels and assets is free once an MBR network has been established.

“The NCA, in cooperation with the Coast Guard and NOFO, conducted a test of Kongsberg Seatex Maritime Broadband Radio on board our surveillance aircraft LN-KYV and a number of emergency response vessels. The tests demonstrated that the capacity and reach of MBR is very promising,” said Ketil Aasebø, senior advisor for the NCA’s Emergency Response division.

“While conducting an oil on water verification test on the Frigg field, we received live images from our surveillance aircraft at a distance of some 100 nautical miles. The ability to transmit live images and video from a surveillance aircraft to seagoing units for oil spill response is incredibly important. MBR proved itself to be a stable communication medium for this purpose.”{/mprestriction}