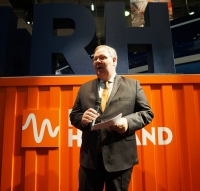 Imtech Marine, the maritime unit sold out of the Imtech Group prior to its bankruptcy and owner of the Radio Holland brand, has now been renamed as RH Marine Group.

The firm says that it will operate two major ‘pillars’ for service and newbuild activities under the new naming structure.

The Radio Holland name will be used by one pillar representing navigation, communications and ICT services, though with a new logo and an updated strategy to strengthen its offering in onboard IT by adding new customised solutions.

The other pillar will focus on carrying on the former Imtech Marine & Offshore business under the name RH Marine, working as a system integrator and provider of electrical, automation systems and HVAC in dedicated markets such as navies, megayachts, special vessels, ferries and cruise ships.

“The rich heritage of the founding companies, Van Rietschoten & Houwens, dating back to 1860, and Radio Holland dating back to 1916, played a key role in the new naming. With both companies’ initials being RH, it made sense for us to integrate those letters into the new naming and implement a new, sharp and colourful branding for RH Marine Group, Radio Holland and RH Marine,” said René ten Brinke, CEO of RH Marine Group.

“In a sense, this is a new start and we’re looking forward to the future.”{/mprestriction}