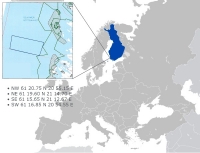 DIMECC, leader of the ‘One Sea – Autonomous Maritime Ecosystem’, has opened what it says is the first globally available test area for autonomous vessel projects in Finland. The test area will be open to anyone wishing to examine the success of their research into unmanned ship systems in open waters, the company says.

{mprestriction ids="1,2"}The test area will be managed and controlled by DIMECC itself, after the space was awarded to the project by the Finnish Government Bureau, Centre for Economic Development, Transport and the Environment of Southwest Finland. The waterways will be named the ‘Jaakonmeri Test Area’ in remembrance of DIMECC contributor Dr Jaakko Talvitie who worked on the project prior to his untimely recent passing.

Companies, research institutes and others wishing to run tests in the area can contact DIMECC through the One Sea website at www.oneseaecosystem.net. DIMECC will then request any required information and provide test documentation and information upon approval.

Once the required permits and contracts are in order, DIMECC says that the tests can proceed immediately. Individual testing can last from one week up to a maximum of six weeks.

The Jaakonmeri Test Area is located on the Finnish west coast outside the municipality of Eurajoki, and measures approximately 17.85 km by 7.10 km. The area is open water and also offers the opportunity to test operations in ice conditions during the winter. The test area will additionally offer data connectivity services through DIMECC partners.

DIMECC says it is already in discussions about the first tests, to be announced shortly and expected to begin in the spring of 2018, though the company notes that it may be possible to begin before the end of this year if there are organisations that wish to start testing early.

The One Sea ecosystem was founded in 2016, with partners including ABB, Cargotec (MacGregor and Kalmar), Ericsson, Meyer Turku, Rolls-Royce, Tieto and Wärtsilä. The association of Finnish Marine Industries provides support to the project, and the Finnish funding agency TEKES has invested in the ecosystem.{/mprestriction}