Ships’ operational technologies ‘left to the side’ when it comes to cyber protection, says cyber expert 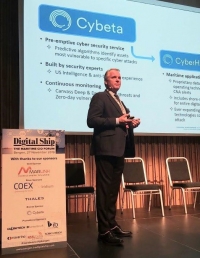 Late last year, Cybeta, a US-headquartered cybersecurity firm, entered into the maritime market with its new cyber protection solution, CyberHelm. Following the success of its original Cybeta solution built by US intelligence-trained experts, the company made the decision to roll out its solution to maritime to help protect vulnerable maritime assets.

{mprestriction ids="1,2"} CyberHelm, the maritime version of the company’s current technology Cybeta, predicts the risk of cyber-attack on companies’ technology assets. It incorporates ship-based operational technologies (OT), such as navigation, ballast, cargo systems, and more in its service, continuously scanning for both known and developing threats and vulnerabilities, and prioritising their severity so users avoid alert fatigue.

“Operational technologies on ships have sort of been left to the side when it comes to cyber protection,” said Mr Fredrik Munck, business development executive at Cybeta, during a presentation given at Digital Ship’s forum in Bergen on November 27, 2019. He believes that the industry needs to pay more attention to the risk that cyber hackers pose to maritime assets. “There are so many CVEs (Common Vulnerabilities and Exposures) being issued and it’s overwhelming. You have to work out which ones are relevant for you, but for some companies it’s just too much to handle.”

Mr Munck says that 80 per cent of 125 maritime executives surveyed have admitted to having a security breach or cyber-attack, referring to an insurance report published last year. The problem he sees is that, “there are so many hidden attacks in maritime.”

There is a significant amount of undiscovered dark web activity with new hacks being developed every day. Ships are at an increasing risk as, “these deep and dark hacking forums are constantly talking about the ‘sexiness of getting into a ship.” The dark web is complex and divided into many different segments, meaning that even with the right password, finding out where the attack has come from is near impossible.

Cybeta’s CyberHelm solution incorporates a patent pending algorithm named ThreatBeta, which scans public sources as well as the ‘deep and dark web’ and quantifies the relative likelihood of a cyber-attack on an enterprise and its individual technologies. Developed over the last 6 years, ThreatBeta shows how severe a company’s threat is and how vulnerable its assets are compared with others. The algorithm, the idea of which was adapted from the financial sector, provides a relative score based on each technology. “If you have a score of more than 1 you are at a higher risk and an easier target. A score of more than 1 indicates a vulnerability that you should immediately look at. Less than 1 is not so critical,” he explained.

The algorithm has been independently tested by Northwestern University’s Kellogg School of Management who found that the service accurately predicts the likelihood of a cyber-attack up to 12 months in advance.

While there is, “no silver bullet that can solve all your issues as one supplier cannot give you one solution to keep you safe,” CyberHelm gives an over-the-horizon view of your vulnerabilities. “We want your technologies to be ahead of it, to tell you something is happening in the dark web so we can warn you of the specific technologies that are at risk.”  {/mprestriction}