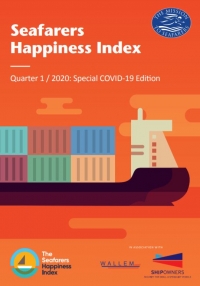 The Mission to Seafarers has published a COVID-19 special issue of its Seafarer Happiness Index report, which shows a growing feeling of confusion from crew changing as the landscape shifts around them.

{mprestriction ids="1,2"} According to the report, shore leave, which is already a problematic issue, has become even more difficult for seafarers as ports are locked down and there are fears of contracting the virus. Respondents reported feeling trapped, concerned for their own health, but also struggling to comprehend what is happening in their home countries and to loved ones. Seafarers also reported feeling that not enough is being done to ensure the safety of those onboard and a feeling of loneliness, physical and mental exhaustion, and homesickness.

Ships have also shown to be breeding grounds for the virus. The seafarers interviewed said they had concerns about the closed environment onboard ships, with air conditioning, lack of emergency response skills, and personal protection equipment (PPE) significant concerns.

While there has not been a large increase in general workload, many crews are having to serve longer onboard due to COVID-19 restrictions and this has resulted in seafarers reporting greater levels of fatigue and burn out. Most seafarers do not know when they will be allowed to return home for their leave. Some crew members have experienced greater workloads due to being allocated with enhanced cleaning and disinfecting of accommodation areas. Seafarers reported having to keep vessels to “hospital standards” of hygiene, and they reported an ongoing and relentless struggle to ensure their vessels remain virus free.

The report found that while crews feel as though they are doing their best to serve the world in these stressful times and they do so in the knowledge that their lives are potentially at stake, there is a sense of pride in doing so, and this will hopefully be felt further as states acknowledge seafarers as key workers.

The survey has been conducted by the Mission to Seafarers in collaboration with the Shipowners’ Club and the Wallem Group.