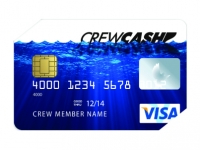 Globe Wireless has launched a new prepaid Visa card programme for captains and crew members, to reduce the need to send cash to ships by increasing the use of electronic transfers.

The new service is the result of an exclusive worldwide sales and marketing relationship with CrewCash, a payments company offering prepaid solutions to the commercial maritime industry.

The CrewCash and ShipMoney products aim to reduce the costs associated with delivering currency to vessels, which Globe estimates at about five per cent.

CrewCash works like any other Visa debit card anywhere in the world, and allows crew members to receive their pay, send money to family or friends, withdraw local currency at ATMs, or make purchases using their card at stores, restaurants or online.

The card also aims to make it less expensive for seafarers to convert their wages to their home currency, compared with being paid in cash.

CrewCash cardholders do not need a bank account and there is no credit check involved.

Globe notes that this product may prove particularly useful in assisting companies in compliance with crew remittance regulations contained in the Maritime Labour Convention.

Title 2, Regulation 2.2 of the states that: “Each Member shall require that ship owners take measures…to provide seafarers with a means to transmit all or part of their earnings to their families or dependents or legal beneficiaries…and…a system for enabling seafarers, at the time of their entering employment or during it to allot…a proportion of their wages for remittance.”

In this regard, CrewCash cards can be issued to a seafarer’s family members at home, and part of the seafarer’s wages transferred to that card to make the process of sending money home much simpler.

ShipMoney meanwhile is a prepaid Visa purchasing card for captains, for use in the procurement of provisions, in emergencies or for other ship expenses.

ShipMoney can be loaded and unloaded with funds at any time, and can be configured to include or exclude ATM access, as well as restricting merchants by merchant category codes.

This means, for example, that ShipMoney cards could be restricted from being used at casinos, massage parlours and other places captains should not be spending company funds.

“As a leading provider of communications, operational and IT solutions to the maritime industry, Globe Wireless is perfectly positioned to introduce CrewCash and ShipMoney,” said David Kagan, president of Globe Wireless.

“We are very excited to introduce a new benefit to crew members while saving commercial maritime companies money.”