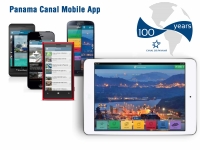 The Panama Canal has launched an application for mobile devices, allowing users to access live webcams, tide charts for the Pacific and Atlantic Oceans, and weather radar.

The app also displays photographs and videos, as well as facts and information for visitors to the waterway, which celebrates its centennial this year. The content, available in English and Spanish, can be shared on social networks.

The app is available for the following operating systems: iOS (Apple for both iPhone and iPad), Android and Windows Phone. The canal authority says that the Blackberry app will be available in the next few days.

"We have great content in our everyday operation of the waterway, and with the new mobile app we will able to deliver it to our audiences."

"This app is also a way to communicate about Panama around the world and for people to know more about our country and its Canal.”