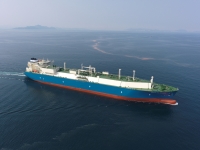 Wärtsilä today announced that it has signed Condition Based Maintenance contracts with four Greek LNG ship owners for a total of 80 dual-fuel engines.

The five-year Technical Management Agreements were signed with Maran Gas Maritime, Dynagas, TMS Cardiff Gas and Thenamaris LNG between the third quarter of 2013 and the second quarter of 2014. They cover maintenance for Wärtsilä 50DF dual-fuel engines.

Wärtsilä says that its Condition Based Maintenance system feeds engine parameters into its database, for the parameters to be evaluated and to allow for the early detection of performance issues, reducing downtime and optimising engine performance.

The agreements with TMS Cardiff Gas and Thenamaris LNG also include Online Remote Support, which means that Wärtsilä's technicians will be able to directly support the LNG carriers’ crew in maintaining their engines via an online connection.

Wärtsilä’s 50DF dual-fuel engine is capable of running on either natural gas, light fuel oil (LFO), or heavy fuel oil (HFO), and can switch between fuels whilst operating.