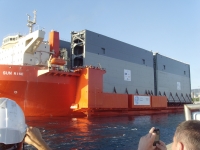 Headquartered in the Netherlands, the ABB subsidiary is a specialist in vessel motion prediction. Korean-based shipping company Pan Ocean has ordered a system that will support route planning, optimisation of speed, heading and fuel consumption, but also motion monitoring and forecasting.

Amarcon says that the system will increase workability and safety during heavy lift transportation projects. A motion monitor system (TMS-3) based on three accelerometers will also be installed on the two heavy freight cargo vessels, the Sun Rise and the Sun Shine. Amarcon says that it allows for multiple critical locations of the vessel, for instance the cargo, to be measured and displayed on the bridge of the vessel.

By using OCTOPUS-Online, the vessel owner can download and display measured motions and accelerations that are collected from the vessel. Authorised users have access to this web portal. The data is downloadable for further evaluation in the office. Amarcon says that heavy freight cargo shipping companies also often provide separate log-ins to the cargo owner so they can follow the status and location of their cargo.

The company also notes that, with this latest order from Pan Ocean, it has equipped more than 80 per cent of semi-submersible heavy lift vessels sailing across the globe with its OCTOPUS suite of products.

“We designed the OCTOPUS-Onboard system to meet the requirements of these special vessels.”