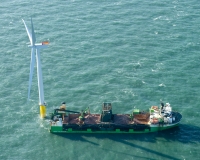 Amarcon, the developer of OCTOPUS-Onboard, has integrated the Wave and Surface Current Monitoring System (WaMoS II) from OceanWaveS into its advisory suite. The combination is being demonstrated at SMM.

WaMoS II displays wave height, period, direction and surface current speed. Amarcon says that, when delivered together with its advisory suite, this data can be made visible within OCTOPUS-Onboard in a separate tab.

Amarcon says that a complete OCTOPUS-Onboard setup with WaMoS II can help a captain grasp the operational limitations of the vessel when sailing through heavy weather conditions. Critical and safe headings can be identified.

Amarcon is part of ABB and OceanWaveS is a Rutter subsidiary.