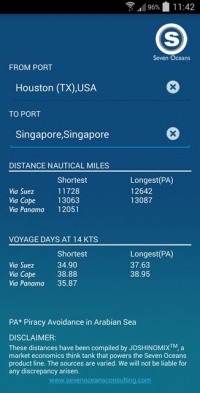 Software provider Seven Oceans Genesis has reported that its new nautical distance calculator app is now available for both Android and Apple devices.

Seven Oceans Distances allows users to input the departure and destination ports of relevant vessels or cargo. According to the company, the app then displays all possible route options, with distance in nautical miles and estimated days at sea provided, and high risk areas such as the Arabian Sea flagged.

With millions of potential port combinations, Seven Oceans Genesis says that all standard trade routes are currently available on the app. Any route inputted by a user that is not available will automatically notify the company, who can review the information and update the app accordingly.

The app is available for free from the App Store and Google Play.