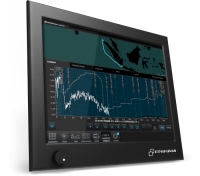 Speed 3.0, one of three new products from Eniram

{mprestriction ids="1,2"}The first of these is Eniram Speed 3.0, an upgrade to the company’s previous version of the product that takes into account factors such as the prevailing sea state while computing and recommending the best speed profile to consume the least energy.

Other parameters like the prevailing weather, weather forecasts, required engine loads, as well as squat, speed restrictions and ECA areas, are also considered in the calculations.

Also newly released is the Eniram Fleet Route KPIs system, a web-based application delivered via Eniram Fleet, and used to gather, store and analyse data such as fuel consumption per engine, engine power, speed-power and LNG tank data across an entire fleet.

The system can identify performance deviations and allows for monitoring of specific performance parameters. A breakdown of propulsion power data can be used to pinpoint areas of energy loss due to effects such as changing weather conditions, including wind and sea state, the company says.

Individual vessel routing performance can be compared against other industry vessels using simulation of all the recorded tracks against sailed dates and conditions. After the leg has been sailed, Eniram Fleet runs the simulation and KPIs for the route are given.

All information is delivered in graphic and map format via the web-based interface.

The Route KPIs are based on a ranking from 1-10 (a lower ranking is better), indicating the position in the industry. For example ‘cost ranking 2’ means the leg was sailed within 20 per cent of the best in the industry.

The decision-support tool offers real-time operational guidance to optimise a vessel’s overall energy management in order to save fuel. The system predicts required energy and fuel consumption, taking into consideration a range of variables such as wind and currents for each specific voyage.

This is displayed via a Key Performance Indicator (KPI) screen that works like an electronic scorecard, showing traffic light values against commonly-agreed targets. The KPI screen starts with a high-level KPI, namely the total fuel consumption on the vessel, which is then broken down to specific energy consumers like propulsion and service power.

A ‘visual energy tree’ can also be created, to show expected and actual fuel consumption for the whole voyage both in monetary and Megawatt-hours (MWh) values.

Detailed analysis of these factors can be viewed onboard the ship, with benchmark graphs and reports to help the crew to identify areas for savings potential by revealing performance deviations and monitoring selected performance parameters.{/mprestriction}