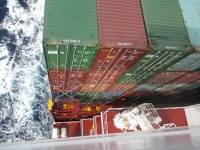 MacGregor, part of Cargotec, has received an order worth US$21 million for optimised cargo handling systems for five 10,500 TEU container vessels, including all equipment and a related software package.

{mprestriction ids="1,2"}The ships are under construction at South Korean shipyard Hyundai Samho Heavy Industries and are being built for German operator Hapag-Lloyd. They are planned for delivery between October 2016 and May 2017 and will primarily be deployed on South American routes.

“Such efficiency can only be achieved when all parts of a cargo system are designed as one integrated element at an early stage of any newbuilding project, before any restrictive decisions have been made.”

“MacGregor is pleased to be working together with Hapag-Lloyd and Hyundai Samho Heavy Industries on this new project. In fact, its relatively tight schedule would not have been feasible without this forward-thinking approach and seamless cooperation between all parties.”

The MacGregor system includes software for optimisation of cargo handling, as well as hatch covers, lashing bridges, a loose lashing system and container fittings for each new vessel. A lifecycle support package is also included.

MacGregor will support Hapag-Lloyd in implementing the cargo system through a training programme for crew and land-based personnel, under which cargo system performance will be analysed and guidance offered on potential improvements.{/mprestriction}