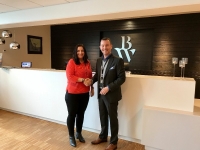 Kinnetik Solutions, a maritime e-Commerce company founded as a replacement for the discontinued MarineLink system, reports that it has now passed the milestone of having 5,000 online suppliers as it approaches the end of its third month in operation.

{mprestriction ids="1,2"}Kinnetik Solutions was founded in late 2016 by the MarineLink management team after Norwegian company EVRY took the decision to terminate the service last year. MarineLink, in different guises and via various owners, had been in operation for approximately 17 years up to that point.

The service introduced by Kinnetik has so far been successful in transitioning a number of previous MarineLink customers onto its new technology, and has directly integrated the system with shipping companies including Jo Tankers, Aker Bio Antarctic, Fred Olsen Windcarriers, Awilco, BW Fleet Management, and Wagenborg Shipping. Other indirectly integrated customers include Maersk and Fleet Management.

The company says that it has also managed integration with a variety of maritime software packages to more easily mesh with existing processes, including those from SpecTec, ABS and Tero Marine, and can configure the software to work with in-house applications as required.{/mprestriction}