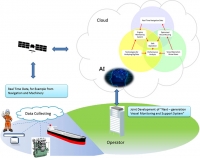 Mitsui O.S.K. Lines (MOL) has announced that it has signed an agreement with Mitsui Engineering & Shipbuilding (MES) to jointly develop vessel monitoring and support systems which they hope to eventually offer to the wider maritime market.

{mprestriction ids="1,2"}The envisioned systems will be based on real time vessel data acquired by data collection units produced by MES, linking with, for example, navigational equipment and onboard machinery.

MOL will aim to apply the new systems in the prevention of marine incidents and reducing equipment failure, as well as supporting optimised vessel routing through the integration of technologies such as AI (artificial intelligence).

The partners note that, in addition to their joint efforts, they wish to invite other maritime bodies such as engine manufacturers to add their own technologies to the development of the new systems.

MOL has classed this joint development deal as part of its ISHIN NEXT smart ship project, announced in November 2016.

Outside of this new partnership, MOL and MES are also participating in an Autonomous Ocean Transport system R&D project to establish a road map for the development of autonomous vessels, supported by Japan's Ministry of Land, Infrastructure, Transportation and Tourism (MLIT) as part of its 2017 Transportation Research and Technology Promotion Programme.{/mprestriction}