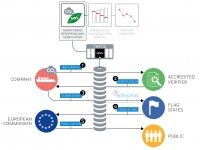 THETIS-MRV, a CO2 monitoring, reporting and verification system created by the European Maritime Safety Agency (EMSA), has now gone live to support the EU’s efforts to encourage the reduction of greenhouse gas emissions in the maritime transport sector.

{mprestriction ids="1,2"}The system will enable companies responsible for the operation of large ships using EU ports to report their CO2 emissions in line with the EU’s Monitoring, Reporting and Verification (MRV) regulation that comes into force on 1 January 2018. The emissions data collected will be made public and updated yearly.

EMSA was tasked with developing a data monitoring and reporting system by the European Commission’s Directorate General for Climate Action as part of a four-year cooperation agreement between the two parties signed in March 2016.

The MRV module is an extension of the existing THETIS information system, which offers a single window for data from several different sources in support of Port State Control inspections. The new module will assist shipping companies in working with accredited verifiers to prepare their monitoring plans, and facilitate the release of emission reports and documents of compliance to the European Commission and relevant flag state authorities.

EMSA notes that the MRV rules apply only to ships above 5,000 GT, which it says account for around 55 per cent of ships calling at EU ports and yet represent around 90 per cent of the total share of related emissions.{/mprestriction}