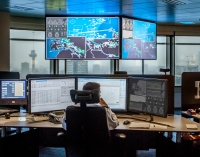 The Port of Rotterdam Authority has put into operation an Internet of Things (IoT) platform to better plan and manage shipping.

{mprestriction ids="1,2"}The first part of the IoT platform is based on real-time hydro (water) and meteo (weather) data. Using a network of 44 sensors, information on height of tide, tidal stream, salinity, wind speed, wind direction and visibility, data is generated and inputted into prediction models, data from Rijkswaterstaat and astronomical calculations.

Current users of the hydro/meteo system include the Pilotage Service, Rijkswaterstaat, DCMR and various departments within the Port Authority. It is expected that the number of users will increase further.

According to the port, the IoT platform enables external parties to connect with this real-time data easily through global and open standards. The platform is reportedly already processing 1.2 million data points for models, systems and users each day.

“It’s a fantastic step in the development of Rotterdam as ‘smartest port,’ stated Ronald Paul, the Port Authority’s chief operating officer. “Just as important, however, is that the cloud platform and the generated real-time information, which includes infrastructure, water and weather condition data, enable us to further improve mission-critical processes in the service to our clients.”

Further sensors incorporated on and in quay walls, dolphins, waterways, roads and traffic signs generate continued measurement data, which can communicate with other autonomous systems. This lays the foundation to facilitate autonomous shipping in the Port of Rotterdam in the future.{/mprestriction}