Bunkers are one of the largest costs associated with a voyage, so making the right decisions around it are crucial. Although many shipping companies have dedicated bunker teams, the decision of where to bunker tends to start with the chartering manager during their initial voyage estimation.{mprestriction ids="1,2"}

Before a vessel becomes open, chartering managers begin to assess multiple voyage options. This typically happens well in advance as an unemployed ship equals unrecoverable earnings (time is a perishable good). For an accurate voyage estimate, chartering managers need to collect information on both the vessel and ports specific to the voyage.

However, voyage parameters are mostly variable and need to be gathered for all voyage options: sea distances, weather forecasts, calling costs, FFA rates and of course, bunker prices.

There are established software solutions for most of the above (e.g. Seametrix or Netpas for sea distances, StormGeo for weather routing, DA Desk or Diabos for calling costs), however bunker prices are more complex as it’s not enough to only check bunkering options at the load and discharge ports.

As the screenshot (below) of our new software illustrates, even a short voyage across the Mediterranean has many potential bunkering options. 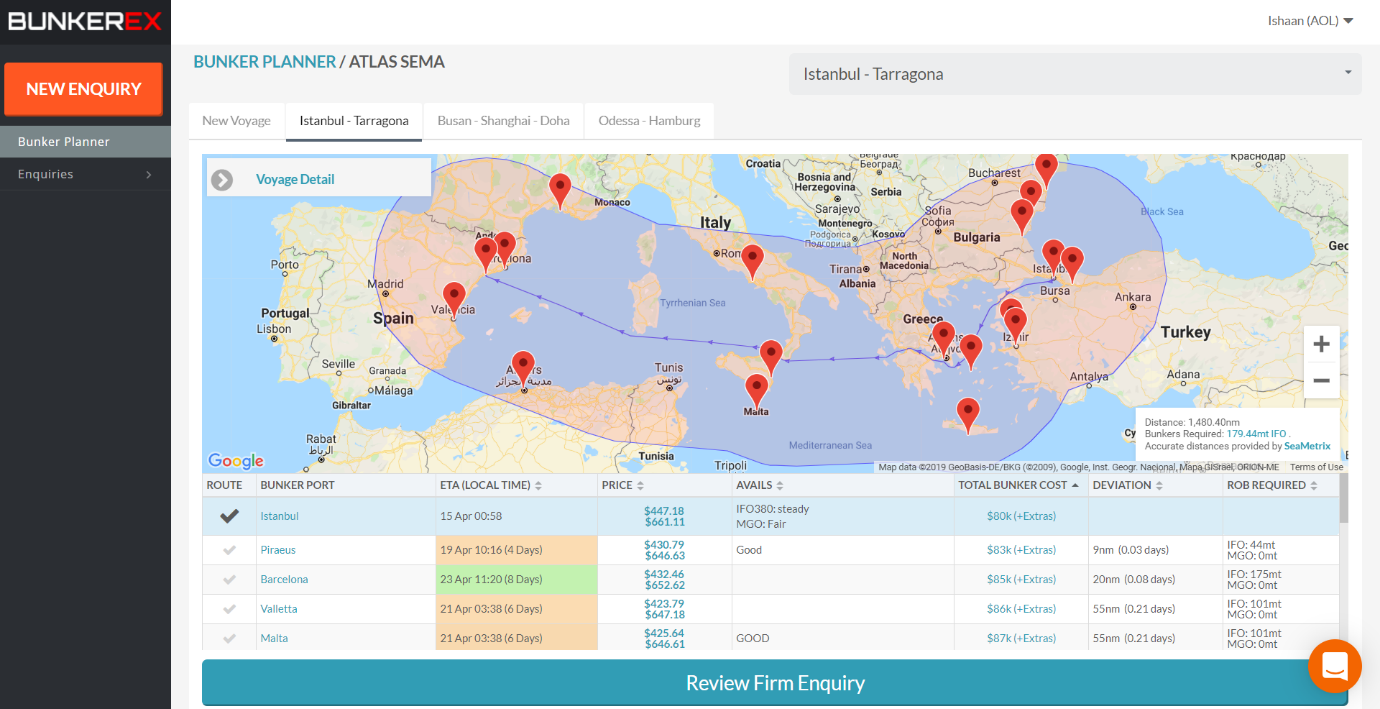 For a thorough voyage estimation, commercial operators need to evaluate every port to check:

Doing this for each bunker option on every potential voyage is not feasible even with a large team, but how much does this really matter?

Hundreds of thousands in lost TC earnings: A Case Study

A common misconception is that there are only a handful of major bunker ports in the world and that these are always the cheapest options. For example, many owners will repeatedly bunker in one of Singapore, Rotterdam, Fujairah, Gibraltar or Houston whenever they sail nearby without evaluating other options. Looking at the data illustrates how expensive this might be.

At some point over the last 6 months, each one of Singapore, Fujairah, Busan, Shanghai and Zhoushan were the worst of the five bunkering options for this voyage.

Bunkering at these ports during those periods would have cost shipowners an extra +$9.5k, losing $257/day of potential TC earnings on this voyage (averaged and assuming 31 sailing days and 6 days port stay).

Even choosing the 2nd best option averages to +$2.2k, equalling an extra $60/day on this voyage.

As our real-life back tests confirm, multiplying this across an entire fleet means the cost of not choosing the right bunker port can add up to hundreds of thousands of lost TC earnings per year.

Where technology can help

Given the sheer number of moving options to evaluate, it is unrealistic to expect chartering, ops or bunker teams to continually recalculate all possible bunkering options. Dedicated bunker desks are typically charged with managing credit lines, negotiating and fixing firm stems, dealing with claims and now researching 2020 strategies.

Our technology is built precisely for this: to grind through thousands of potential bunker options in fractions of a second and combining it with distances, deviations costs and live prices to reveal the cheapest options. Besides potentially saving money, it cuts down hours of time collecting bunker indications and calculating which port would be best.

Automatic updates every 15 minutes mean any changes in market conditions are caught, whilst it also doubles as an accurate distance calculator and bunker research platform for calling costs, suppliers, extras and specifications in each port.

Performance optimising technologies are touching many different corners of maritime and the choice of bunker port should be no different. As is plain to see from the data above, spending a few minutes punching in a voyage can reveal drastically cheaper bunkering options. Not doing so can unknowingly cost owners and operators hundreds of dollars per day per vessel.

Article written by Ishaan Hemnani for and on behalf of BunkerEx Limited. {/mprestriction}